NASA’s Apollo Lunar Rover Vehicle was developed in the early 1970s and then used on the Apollo 15, 16, and 17 missions to the moon throughout 1971-1972. The LRV was designed to traverse the moon’s terrain in its lower gravity atmosphere, allowing astronauts to explore greater areas of the surface. The LRV was instrumental in the significant amounts of knowledge gleaned from those missions.

Decades later, NASA needed to develop a new Rover vehicle, this time for Mars. They wanted to replicate the original wheels for testing purposes as the Rover was re-engineered for its new mission. NASA needed to see how much weight and abuse the Rover tires could take. The only problem was that the original Rovers, and the their highly unique and special-made wheels, are still up on the moon. All the large tire manufacturers enlisted for the job had to work from a series of decades old drawings.

Tallmadge Spinning & Metal got connected to NASA’s tire manufacturer through another project that involved spinning small pieces. After coming down and showing us the whole project, the tire manufacturer enlisted us to help remanufacture the original Lunar Rover tires.

Over the course of 6-8 months, we collaborated closely with the tire manufacturer to reproduce the Lunar Rover tires. All we had were the drawings, which did not even include notes on manufacturing processes.

We designed and engineered tooling, machinery, and processes specifically for remanufacturing the LRV tires. Working with a range of crazy materials, we laser cut, rolled, and spun. After much back and forth, our components of the tires were completed.

The tire manufacturer then took all of the pieces and assembled the recreated Lunar Rover wheels, covered with their own snakeskin-looking mesh.

The beauty of this project for us was that it was more about the research and development partnership than it was about the actual manufacturing. Our expertise and processes were simply the backdrop for an exciting, meaningful project.

Throughout the project, the tire manufacturer carefully documented every minute step of the entire process we went through to get to the finished Lunar Rover tire.

The tires we helped produced have been used in NASA’s rigorous testing to see just how much abuse and weight they could take. They worked 40 years ago on the moon, and now NASA has important data to direct the Mars Rover project, where conditions are more variable, heavier, and subject to higher gravity.

Our remanufactured Lunar Rover tires are also showcased in the Great Lakes Science Center – and in our own conference room.

Looking for a R&D Manufacturing Partner?

If you have a prototype, reproduction, or are still in the idea phase, contact us. We’d love to have you come see the Lunar Rover wheels for yourself and talk with us about how we could partner with you from R&D to production. 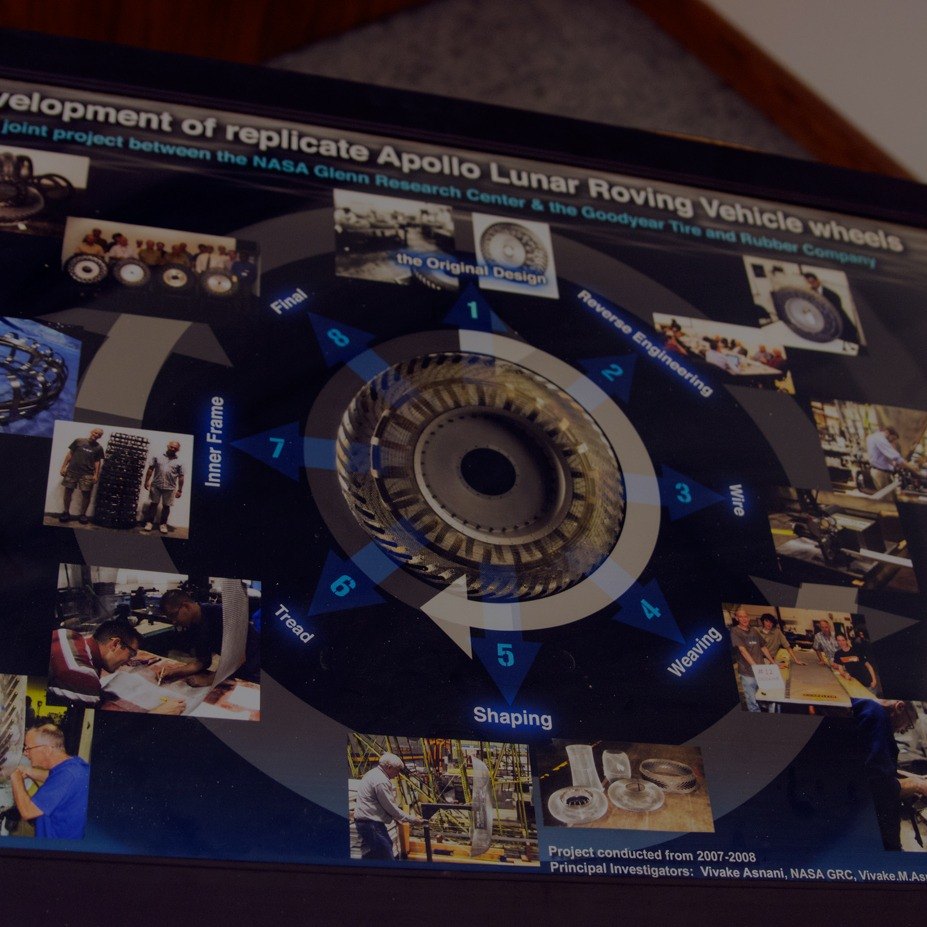 Request a Quote to Get Started

From research and development to final production, Tallmadge Spinning & Metal is your partner for cost-effective and superior metal products. Request a quote today to get started.

REQUEST A QUOTE TODAY TO GET STARTED