Tallmadge Spinning & Metal has created top-quality metal products from start to finish for 75 years—and we are a three-generation, family-owned, American business to boot.

As we celebrate our company’s 75th anniversary in 2022, we want to give a nod to our rich history and shine a spotlight on our 3rd generation of leadership. Jake and Mike (grandsons of founder Alex Sasanecki and sons of John Sasanecki) consider themselves fortunate to have the opportunity to carry on the TSM name and legacy built by Alex and John.

Our mission is simple. With superior customer service backed by a drive to produce high quality products, we work with our customers to find the most efficient and cost-effective ways to meet their demands. Our extensive manufacturing capabilities and experience allow us to work closely with our customers to produce their parts in full, from design to completion.

Alex’s son John steps up in the company

Alex’s son John steps up in the company 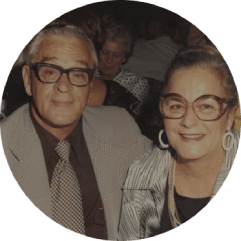 It Starts with Founder Alex

Alex Sasanecki, then a 34 year old father of three, held a secure job at Goodyear where he learned how to spin metal. Then in 1947, he took a risk to start his own manufacturing business. Living in Tallmadge, Alex and his wife Ann built a small building on the lot behind their house on Southeast Avenue. Tallmadge Spinning & Metal was born.

Alex began getting work as a supplier for tire and rubber companies, as well as the military industry. He started to see some success. Although there were a lot of lean times and ups and downs, eventually TSM established a great reputation. The company offered superior service and quality products. This led to a growing customer base in Northeast Ohio, and ultimately stretched nationwide.

F&E PaymentPros needed a manufacturer to aid in the design and fabrication of a product—a stand for our pedestal kiosks. Mike and Jake spent the time with us while we described what we were looking for, questioned us on various aspects to consider, and designed the unit. We were thrilled with their depth of knowledge and interest in our relatively small project. The end product came in within budget and, more importantly, was beautifully fabricated. Later, we embarked on a second project with the same results. F&E is proud to have such an outstanding organization as a partner in helping us produce and deliver high-quality products consistently.

John began working in the shop as a teenager in the 1960’s. He worked the night shift and put himself through college; He attended Kent State University in the early 1970’s. After graduating, John took on a bigger role at TSM. He was bringing in sales, but when some of the rubber companies left the area in the late 70’s, he looked to diversify. He was taking any work to stay afloat.

By the 1980’s, Alex had taken a step back and John was running the operation. He invested in new machinery, tried to widen TSM’s customer base, and started branching out into different industries. In 1996, TSM moved to a larger Akron facility (our current Gilchrist Rd. location) to house upgraded machinery and help the team fulfill the work from all the new sales he was bringing in. 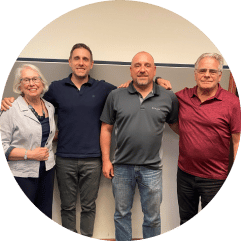 The Third Generation of Sasanecki’s

John and Linda’s son Jake began working at TSM in high school around 1994 learning everything in the shop—welding, spinning, press brake, etc. He stayed on while earning his business degree at the University of Akron, and eventually he was promoted to General Manager in 2010.

Jake’s brother Mike was hired in 2010. He graduated from the University of Akron as well and has learned sales skills from John, accounting from Linda, and has also dabbled in some administrative work.

Today, we’re still working on building our customer base and we’re proud to branch out to different industries (clean air, mass transportation, automotive, food industry, aerospace). The future’s looking bright under the 3rd generation of leadership—Jake and Mike!

Tiffin Metal Products has used Tallmadge Spinning & Metal to perform laser cutting, forming, welding, and spinning for 20 years. TSM regularly meets or exceeds requested due dates on time sensitive orders. The purchasing team at Tiffin Metal Products is looking forward to growing our relationship with TSM for many years to come. 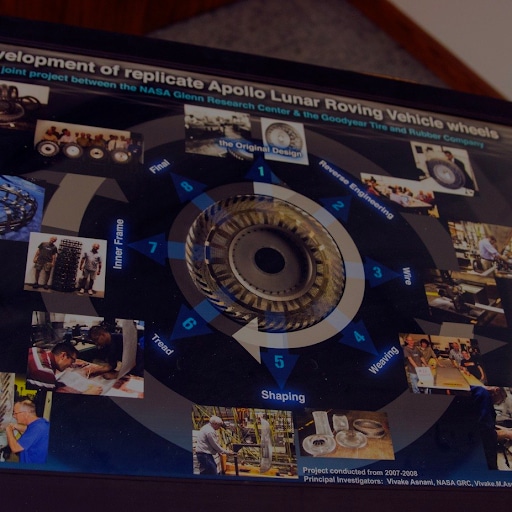 Every business has a project or a customer who was particularly memorable, and ours has to be when we worked with Goodyear and NASA to replicate wheels of the Apollo Lunar Rover Vehicle that was on the moon. We connected with NASA’s tire manufacturer through another project that involved spinning small pieces. They later enlisted us to help remanufacture the original tires on the Rover.
Learn more about the project here!

Projects with a Big Impact

Our laser cutting, spinning and fabrication capabilities are endless, which means that the limits of what we can create stretch pretty far. Below are a few examples: